At Garco we encourage our team to stay involved and connection with the community through their involvement in organizations and causes that they are passionate about. Today we’d like to congratulate Garco Pilot Paul Lucas on his recent designation as 384th Air Refueling Squadron Honorary Commander. A special ceremony, with limited attendance due to the current pandemic, was held last Friday at Fairchild Air Force Base to welcome the new honorary commanders. The Honorary Commander Program matches approximately 40 business leaders with officers at Fairchild to introduce the officers to Spokane and the surrounding region. 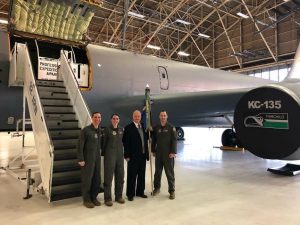 Paul Lucas grew up in the Phoenix, Arizona area and found his way to the beautiful Inland Northwest over the years through his career. He proudly decided to serve his country and joined the USAF in July 1984. He initially served as a jet engine mechanic specializing in jet engine performance and diagnostics tests, followed by his role a jet aircraft inflight performance trend analyst. He left the USAF in December 1994 and immediately began his formal flight training; earning his commercial multi-engine pilot certificate in early 1996. Since then Paul has earned several FAA flight instruction certifications including certified flight instructor instrument airplane and multi-engine instrument airplane. In 2000, he obtained the airline transport pilot multi-engine airplane certification. Currently Paul has over 14,000 flight hours in various aircraft.

He enjoys his current role as corporate pilot and aircraft maintenance manager for Garco Construction. Paul has been with the company for 12 years. He is also very active and invested in Garco’s safety program and enjoys bringing the aviation safety culture into the construction environment through positive contact with field personnel and problem-solving whenever possible.

In addition to his role at Garco, Paul remains committed to various groups and organizations within the community. He is an active FAA safety representative for the Spokane Regional Flight Standard District Office. His duties include assisting as needed in aviation accident and incident investigation, providing input to the FAA for accident prevention, and performing instructional activities for safety. Since 2018, Paul has also served as a committee member on the Forward Fairchild Committee. This committee convenes business, community, and military leaders from Fairchild Airforce Base to maintain strong relationships with the base, provides advocacy support, and works with the Washington Military Alliance on state-wide Department of Defense issues. He also volunteers at the Veterans Cemetery located in Medical Lake, Wash. with the group “Ladies and Gentlemen of the Veterans Cemetery” during military funerals.

Thanks for serving our community Paul – you make a difference!