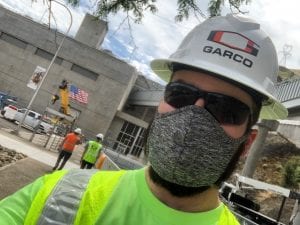 Meet Mark Hegbloom. This is his first summer interning at Garco. He is an incoming Junior at Gonzaga University majoring in civil engineering. Mark is originally come from Southern California, but moved to Spokane for college.  He shares, “This has been my first internship of any kind; and I am extremely grateful that Garco was able to assist me in learning about my desired career, as well as teaching me real-world knowledge that I would have not been able to get in the classroom.”

So far this summer, Mark has been predominantly working in the main office, assisting project engineers and project managers. He adds, “Thankfully, I have been able to visit a few job sites, whether it be with safety or as a field trip for on-site learning experiences. These sites include the FAFB SERE Dorm Project, Goodrich SSC Expansion, the Metals Fab Project, Lower Granite JFF Project, as well as the Trent Bridge Replacement job. In the office, his main focus has been compiling O&Ms, as well as aiding the project managers and estimators in numerous bids throughout the summer, assisting in takeoffs, as well as corresponding with subcontractors for the estimating team.

Much like many other individuals in the industry, Mark comes from a family that has been involved in general construction/trades for a few generations. Mark says, “My father spent his entire professional career in the industry, working for GCs such as Kiewit, Skanska, and Clark Construction in Southern California. With my father being involved so heavily in the industry for the greater part of 20 years, I guess you could say that I was introduced into it at a very young age.” He notes that the other key factors that influenced his career interest include his general curiosity for how things are built, as well as the science and math behind it. He believes that is why he enjoys every day that involves anything civil-related.

Before his internship, Mark had no clue of what general construction, or even the applications of what civil engineering would include. Now, after being introduced to the industry, he says, “I could definitely say that I have several options to choose from in terms of which path I would like to proceed with be it heavy civil, commercial, and overall structural, etc.).

Mark was interested in interning at Garco after researching the companies that would be attending Gonzaga’s Career Fair last year. After speaking with the representatives from Garco, he knew that Garco would be his number one choice.  His  favorite thing that he has done so far this summer would be completing a set of O&M Manuals for the Lower Granite JFF project. Mark says, “This task included five sets of 26 volumes of O&Ms, taking nearly six weeks of copying, assembly and then requiring a pallet to be transported. While this activity would not necessarily be considered fun by most definitions, I definitely get a laugh at how large that project was; especially when it involved using a temperamental copier and printer.”

Thanks for sharing your insights Mark; the Garco team is wishing you much success as you finish your education and pursue your career!